On March 5, 2019 TVO broadcast a show about industry funding and research, to address concerns raised on-air by CBAN, and following audience complaints about imbalance and the undisclosed industry funding of panelists on a September 2018 discussion of genetic engineering.

“Marion Nestle, author of “Unsavory Truth: How Food Companies Skew the Science of What We Eat,” talks with Nam Kiwanuka about how nutrition science can be slanted by the funding that researchers receive from food companies. Nestle also discusses the role that journalists can play in either spreading or exposing biased research findings.” Click here to watch the 2019 interview with Marion Nestle.

CBAN also discussed the problem of results from industry funded studies in our GMO Inquiry 2015 report “Are GM Foods Better For Consumers?”: “Independence from industry in the production of science and in risk assessments is also important because industry-funded studies tend to produce results that are more favourable to company products. This trend of funding bias has been widely observed, for example in research on the health risks of nicotine and in clinical drug trials. In relation to GM foods, a 2011 review found that studies where authors had professional links to the biotech industry were strongly associated with conclusions of GM food safety and nutritional value.”

Several members of the public have written to CBAN to express concerns about imbalance in the panel make-up, and at least one member of the public wrote to TVO to express their concerns. In response to these concerns raised by the public, we wish to provide additional details on the panel members and advise the public of our attempts for greater transparency. 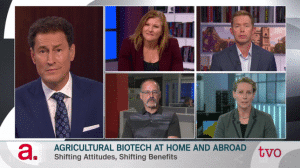 During the show, Lucy revealed the corporate funding shared by the other three panel members. CBAN had informed the show about this shared funding well in advance of the program and had also repeatedly requested that the funding sources be disclosed to the audience. The three panel members all get funding from the same large biotechnology companies.

Here are the details of the four panel members discussing genetic engineering:

1. Ian Affleck of CropLife Canada which is the lobby group for all the major GM seed companies including Bayer (which bought Monsanto), Corteva (the new Dow-Dupont), Syngenta, and BASF. These four companies now control around 65% of the global commercial seed market and more than 70% of global pesticides. Click here to see the full list of CropLife’s corporate members.

2. Crystal MacKay of the Canadian Centre for Food Integrity which is a new non-profit organization funded by the companies Bayer, Corteva, and Syngenta. Its mission is “To help Canada’s food system earn trust” and t heir vision is “to be Canada’s recognized service provider in food system trust collaboration”. It is affiliated with a US group of the same name and is a division of the Canadian group called Farm & Food Care. Here is a link to their “Members & Partners”.

3. Stuart Smyth, an Assistant Professor in the Department of Agricultural and Resource Economics at the University of Saskatchewan and “Industry Funded Chair in Agri-Food Innovation” funded by Bayer, Syngenta and CropLife. He also writes for the website “GMO Answers” which is funded by the members of The Council for Biotechnology Information which includes Bayer, Dow-DuPont, and Syngenta.

4. Lucy Sharratt, Coordinator of the Canadian Biotechnology Action Network (CBAN) which is a coalition of 16 environmental, social justice and farmer organizations funded by donations from individuals and member groups, some foundation grants, some health food companies and some small organic farm businesses. Click here to see the full list of our most recent donors in our Annual Report 2017.

Who are these companies?

The “Big Six” companies controlling over half of the global commercial seed and pesticide markets is now the “Big Four” because of recent corporate mergers. Prior to the new mergers of Bayer-Monsanto, Dow-Dupont (Corteva), and ChemChina’s purchase of Syngenta, the breakdown was as depicted in the below graphic from 2015. The new numbers are not yet available however we know that the four companies top companies –  1. Bayer/Monsanto 2. Dow-DuPont (Corteva) 3. Syngenta (bought by ChemChina) 4. BASF. – control about 65% of the global seed market and more than 70% of global pesticides. Click here for more information.

Before the last of the mega-mergers was finalized in 2018, it was the “Big Six”: 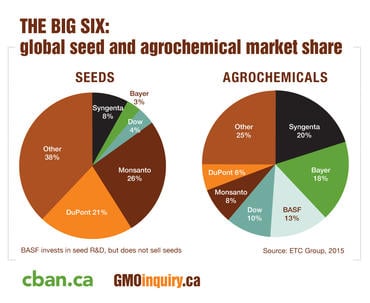