The Inevitability of Contamination from GM Alfalfa Release in Ontario 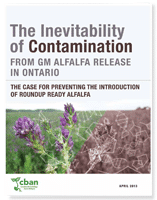 There are several ways in which this gene flow can occur with alfalfa. These may be broadly divided into three categories: seed escape, pollinator-mediated gene flow, and gene flow through volunteer and feral alfalfa. The biological characteristics of alfalfa conspire to present a particularly potent risk of gene escape and, outside of considerations relating to the biology of alfalfa, the role of human error/behaviour in handling GM alfalfa seed and hay is a known risk. April 2013. Canadian Biotechnology Action Network.