The promise that genetically modified crops can “feed the world” is largely used by the biotechnology industry to encourage widespread acceptance of this controversial technology, but it is disconnected from the complex reality of world hunger and the limitations of GM crops themselves. 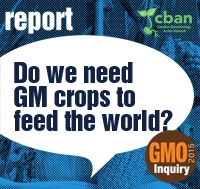 The argument that this technology can solve the problem of world hunger, or be a tool towards ending hunger, is compelling but false. Experience with GM crops shows that the application of GM technology is more likely to enhance and entrench the social, economic and environmental problems created by industrial agriculture and corporate control.

Resources and related information from CBAN

GMOs in South Africa 23 Years On: Failures, Biodiversity Loss and Escalating Hunger, August 2020. A report by the African Centre for Biodiversity summarizes South Africa’s experience with GMOs, the impact of GMOs on the environment, biodiversity and food security, and the gaps in the regulatory system used to approve GMOs in the country. The report calls concludes that is time for a shift, “phasing out industrial agriculture and transitioning towards a just and ecologically sound agricultural and food system,” and calls on the South African government to “reign in corporate agribusiness and begin a process to decolonise and decorporatise our food system to ensure the liveability of the plant, where everyone’s basic needs are met.”

Eating Tomorrow: Agribusiness, Family Farmers, and the Battle for the Future of Food, by Timothy Wise, 2019, The New Press.

World Hunger is on the Rise, Let’s face it: The U.S. is not feeding the world, article by Timothy A. Wise, July 2019

Seeds of Neo-Colonialism – Why the GMO promoters get it so wrong about Africa. Statement by the Alliance for Food Sovereignty in Africa, May 2018.

Who Will Feed Us? The Industrial Food Chain vs the Peasant Food Web, Report from ETC Group, October 2017: “We are told that it is big agribusiness, with its flashy techno-fixes and financial clout, that will save the world from widespread hunger and malnutrition and help food systems weather the impacts of climate change. However, a new report from ETC Group shows that in fact, it is a diverse network of small-scale producers, dubbed the Peasant Food Web, that feeds 70% of the world, including the most hungry and marginalized people.”

Non-governmental and farmer organisations from South Africa, Tanzania, Mozambique, Kenya and Uganda condemned the decision by the South African government to allow Monsanto to commercially sell its genetically modified “drought tolerant” maize seed. According to the groups, there is no evidence showing that the drought tolerant trait even works.

“For Your Own Good”, by the African Centre for Biodiversity. April 2016. “The GM industry is expanding its grasp to African traditional crops such as cassava, sorghum, sweet potato, pigeon pea, cowpea, banana as well as rice under the guise of philanthropy.”

“GMOs: Fooling – er, “feeding” – the world for 20 years” by GRAIN. May 2013. Debunks the myths summarized in five points: GMOs will feed the world; GMOs are more productive; they will eliminate the use of agrochemicals; they can coexist with other crops; and GMOs are perfectly safe for humans and the environment.

“Primer on the Global Food Crisis” by USC Canada. 2012. “The food crisis is not a scarcity problem; it’s an access and distribution problem, fundamentally linked to the way our food is produced. Simply put, our global food system is unfair and no longer works. It needs a dramatic transformation. How we grow our food matters.”

Why GM Crops Will Not Feed the World by Bill Freese (Centre for Food Safety), GeneWatch. Jan/Feb 2009.

“Seeking a technological food fix for world hunger may be the most commercially malevolent wild goose chase of the new century.“- Dr Richard Horton, editor of The Lancet. See this and other quotes across the years.

The International Assessment of Agricultural Knowledge, Science and Technology for Development (IAASTD) asked how agricultural practices and policies can reduce hunger and poverty, improve health and rural livelihoods, and lead to fair and sustainable development around the world. The IAASTD identifies policy, research and investment options to transition towards more sustainable food and agricultural systems in future. The Assessment was conducted by over 400 scientists and development experts from more than 80 countries. It was sponsored by four United Nations agencies, the World Bank and the Global Environment Facility. The IAASTD findings were approved at an Intergovernmental Plenary in April 2008 and published in 2009.

There are 1.5 billion on 380 million farms; 800 million more growing urban gardens; 410 million gathering the hidden harvest of our forests and savannas; 190 million pastoralists and well over 100 million peasant fishers. At least 370 million of these are also indigenous peoples. Together these peasants make up almost half the world’s peoples and they grow more than 70% of the world’s food. Better than anyone else, they feed the hungry. If we are to eat in 2050 we will need all of them and all of their diversity.

Ecological Agriculture Can Feed the World

Sustainable Peasant and Family Farm Agriculture Can Feed the World, Via Campesina, 2010

10 Reasons Why Organic Can Feed the World, Ed Hamer and Mark Anslow, The Ecologist, 2008. 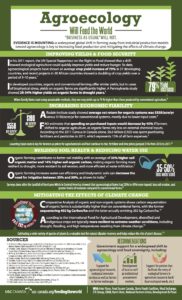 “Agroecology and the Right to Food”, Report presented at the 16th Session of the United Nations Human Rights Council, March 2011. Olivier De Schutter, United Nations Special Rapporteur on the Right to Food. “To date, agroecological projects have shown an average crop yield increase of 80 per cent in 57 developing countries, with an average increase of 116 per cent for all African projects. Recent projects conducted in 20 African countries demonstrated a doubling of crop yields over a period of 3 to 10 years.”

Alliance for A Green Revolution in Africa (AGRA)

The Alliance for a Green Revolution in Africa (AGRA) is an international non-profit organization that was launched in 2006 by the Bill and Melinda Gates Foundation and the Rockerfeller Foundation. The organization says its goal is to “improve food security for 30 million smallholder farm households and in 11 African countries by 2021.”

Despite the large amount of money that AGRA has collected and distributed to promote the use of commercial seed, fertilizers and agrichemicals, recent reports find that hunger levels area worse, and there has been no improvement in food security or farmer income in the target countries:

Failing Africa’s Farmers: An Impact Assessment of the Alliance for a Green Revolution in Africa, July 2020: A white paper by researchers from Tufts University, and led by researcher Timothy Wise, concludes that “The evidence suggests that AGRA is failing on its own terms.” In an interview, Wise summed up his findings about AGRA: “It’s a failing model, failing results; it’s time to change course.”

False Promises: The Alliance for a Green Revolution in Africa (AGRA), July 2020: Several civil society organizations from Africa and Germany also released a report, based partially on the results of the white paper above, calling on governments to stop promoting and investing in Green Revolution based approaches and instead support agroecological programs that support small-scale farmers, particularly women and youth, develop climate-resilient and ecologically sustainable farming practices.

Gates Foundation’s ‘Failing’ Green Revolution in Africa: New Report, by Stacy Malkan, July 2020. This article summarizes the findings of both reports on AGRA’s approach and failure in Africa.

Messengers of Gates’ Agenda: A Case Study of the Cornell Alliance for Science Global Leadership Fellows Program, July 2020: This report by the AGRA Watch program of Community Alliance for Global Justice analyses the ways in which the Bill and Melinda Gates Foundation frames the debates on food and agriculture policies. It examines how, in particular, The Cornell Alliance for Science (CAS), which is funded by the Gates Foundation, “uses its affiliation with Cornell University to claim scientific neutrality while assiduously promoting communications aligned with agribusiness through its use of Fellows, especially those from Africa.”