“Golden Rice” is the name of a rice that has been genetically engineered (genetically modified or GM) to produce beta carotene, which the body can convert into vitamin A. This beta-carotene gives the rice grains a yellowish colour that inspired its name. It has not been proven as effective but is being widely promoted as an example of how GM can be used to solve important global problems.

In December 2019, the Government of the Philippines approved Golden Rice as safe to eat, following similar approvals by regulators in Canada, the US, and Australia and New Zealand (2017/2018). Its efficacy has not yet been assessed and it is not yet approved for cultivation. There is no GM rice currently grown or sold anywhere in the world.

July 21, 2021: The Philippines’ Bureau of Plant Industry in the Department of Agriculture has issued the biosafety permit for commercial propagation of the genetically engineered Golden Rice.

December 20, 2019: The Government of the Philippines has approved Golden Rice for safe human consumption, though its efficacy has not yet been assessed and it is not yet approved for human consumption. “The risks of Golden Rice far outweigh its supposed benefits,” said Dr. Chito Medina, member scientist of the farmers network MASIPAG in the Philippines. “We will be better off improving and diversifying the food crops in the farms and diets of our children to ensure that proper nutrition is achieved.” Read the statement “Farmers and Civil Society Organisations across Asia denounce Philippines’ decision to approve direct use of Golden Rice”.

November 2019: The Canadian Biotechnology Action Network’s new report finds that Golden Rice has low and variable levels of beta-carotene, the beta-carotene degrades significantly during storage and cooking, and has not been adequately tested for bioavailability. 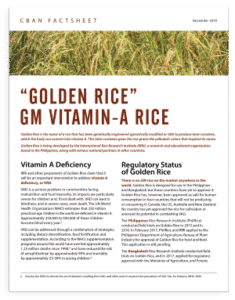 March 2018: Health Canada approved the genetically engineered Golden Rice as safe for human consumption, even though the rice is not intended for the Canadian market and has not yet been approved in the intended markets in Asia. Health Canada said, “The efficacy of the GR2E rice in helping vitamin A deficiency in affected populations was not evaluated.”

The US Food and Drug Administration approved “Golden Rice” as safe in May 2018, and the government agency Food Standards Australia New Zealand (FSANZ) was the first to approve Golden Rice as safe in December 2017.

German non-profit group Testbiotech says, “The risk assessment as performed by FZANZ is not sufficient to demonstrate safety of food derived from GR2.” Read the critique from Testbiotech.

In 2018, Health Canada approved the genetically engineered Golden Rice as safe for human consumption, even though the rice is not intended for the Canadian market and had not yet been approved in the intended markets in Asia. In the summary of its decision to approve Golden Rice, Health Canada said, “The main intended market for this product is in countries such as Bangladesh and the Philippines where diets are typically low in vitamin A…The International Rice Research Institute has indicated that this product is not intended to be sold in Canada.”

Health Canada said, “The efficacy of the GR2E rice in helping vitamin A deficiency in affected populations was not evaluated.”

The 2018 decision by Canadian government regulators (Health Canada) to assess and approve the safety of Golden Rice was not a “humanitarian gesture” ( read CBAN’s Letter to the Editor, The Western Producer, April 12, 2018: Golden Rice assumptions wrong). Health Canada was clear that “the efficacy of the GR2E rice in helping vitamin A deficiency in affected populations was not evaluated” and that “IRRI has indicated that this product is not intended to be sold in Canada.”

So why did Health Canada assess the safety of Golden Rice for Canadian consumption? In its decision, Health Canada noted that “it may be possible that raw commodity or food products derived from GR2E rice may unintentionally enter Canada via imports from countries of production.” In correspondence with CBAN, the department further stated that “Health Canada’s science-based regulatory system for novel foods is internationally recognized and developers often choose to seek authorization in Canada as a first step in their regulatory plan even if they do not plan to sell the product in Canada.” Ultimately, “Health Canada is required by law (i.e., the Food and Drug Regulations) to assess all novel food applications when a notification is filed with the Department.”

“The Canadian government has just waded into a huge global controversy that should be left to Asian farmers and consumers to decide, not Canadian regulators… We need to first give the people and government of the Philippines time to assess and debate Golden Rice, before we weigh in.” – Eric Chaurette, Inter Pares 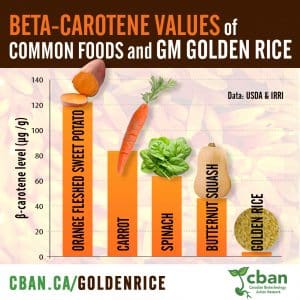 Genetically engineered “Golden rice” is promoted as a solution to the serious health problems resulting from widespread vitamin-A deficiency in the Global South. Golden Rice has been in development for over 20 years and it is still being tested.

Proponents of Golden Rice often claim that opposition has prevented the crop from helping millions of people, but in reality Golden Rice is still not proven as effective.

Other solutions to vitamin-A deficiency are available, such as delivering vitamin A supplements and fortifying vitamin A in staple foods, and are better targeted and more cost efficient. Furthermore, many conventionally bred plants show a high carotinoid content. Vitamin-A deficiency is a symptom of malnutrition and hunger due to severe poverty.

Vitamin A supplementation and food fortification in the Philippines (began in 1999) has already reduced vitamin A deficiency in preschool age children from 40% in 2003 to 15.2% in 2008 (the World Health Organization considers 15% to be the cutoff for when deficiency is considered a public health problem).

Farmers’ organizations across Asia continue to oppose the release of Golden Rice. Read the joint statement from over 30 organizations in the Stop Golden Rice! Network: “Stop Golden Rice! Defend our Farmers‘ Rights! remains the resounding call of Asia farmers‘ network against the impending commercialization of Golden Rice in Asia. Waves of protest mobilizations stirs anew in the Philippines and Bangladesh against its commercialization, while debate rages on in Indonesia, India and other Asian countries where Golden Rice is planned for commercial release.”

For the broader context see CBAN’s GMO Inquiry report “Do we need GM crops to feed the world?”