Gene drives are a technology through which a few genetically engineered individuals are designed to intentionally push new genes through an entire population of a species in the wild. The gene drive mechanism ensures that new genes will be inherited by all offspring (as opposed to an expected half of the offspring in normal inheritance) in subsequent generations. The release of gene drive organisms is designed to alter the genetic make-up of an entire wild population, or to eradicate a population or species. CBAN background article: Gene Drives – Engineering the Wild, Watershed Sentinel, Summer 2021

June 2021 – The European Parliament has called for ban on gene drive technology. In its report on the EU’s Biodiversity Strategy for 2030, adopted at the European Parliament’s plenary: “no releases of genetically engineered gene drive organisms should be allowed, including for nature conservation purposes, in line with the precautionary principle.“

On July 1, 2019 the project Target Malaria announced that they had released male sterile genetically modified mosquitoes in a village in Burkina Faso, West Africa. The release is intended to test the infrastructure and systems for future releases of “gene drive” mosquitoes. Civil society organizations in Africa denounced the release as an unethical experiment.

International Regulation: The United Nations Convention on Biological Diversity has not agreed to an international moratorium on gene drives but has agreed that strict risk assessment is needed as well as the consent of local communities and Indigenous peoples. Press Release – United Nations Hits the Breaks on Gene Drives, ETC Group and Friends of the Earth International, November 29, 2018.

Short Video (1:36 minutes) for a quick technical introduction: What is a gene drive? by Save our Seeds. 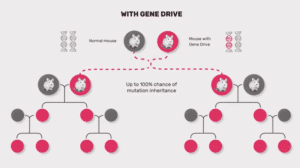 Gene drives are being proposed for pest and disease control in agriculture. However, the most advanced research so far is in insects, specifically in gene drive systems that would alter genes to prevent mosquitoes from reproducing effectively, thus reducing the size of particular mosquito populations.

The research group Target Malaria (see below), funded by the Bill and Melinda Gates Foundation among others, aims to use gene drive mosquitoes to reduce the population of Anopheles gambiae mosquitoes, which transmit the parasite that causes malaria.

In agriculture, applications are being discussed to alter genes so that agricultural pests such as a type of fruit fly (spotted wing drosophila) and pigweed (Palmer amaranth) do not reproduce effectively, in order to make them ultimately go extinct. Researchers are also devising a type of gene-drive mechanism for mammals, and have outlined a hypothetical gene drive system intended to drive a desired trait though a herd or population of a farm animal. ETC Group analysis (2018) of two key patents on gene drives show that they each reference around 500-600 agricultural uses including brand names of 186 herbicides, 46 pesticides, 310 agricultural pest insects, nematodes, mites, moths and others.

Unlike GMOs that have thus far been engineered for confined use in agricultural production, gene drive organisms are expressly designed for intentional release into the wild. Releasing gene drive organisms can therefore be understood as a form of ecosystem engineering. Once released, gene drive organisms cannot be recalled, and the changes they create in the genetic make-up of the population are most likely irreversible. Acknowledgement of this challenge has led to theorizing various means to control or reverse gene drives, however these exist only as mathematical models and are accompanied by their own complex risks. The overarching concern is that genetic change to, or elimination of, an organism in the wild could disrupt ecosystems in unpredictable ways.

CBAN and more than 200 global food movement leaders and organizations representing hundreds of millions of farmers and food workers set out their clear opposition to “gene drives”. Click here to read the letter.

This 15-minute documentary is a great introduction and summary of key aspects of gene drive technology, from Save Our Seeds (Europe):

The research group Target Malaria aims to use gene drive mosquitoes to reduce the population of Anopheles gambiae mosquitoes, which can transmit the parasite that causes malaria. The project is run by researchers at Imperial College in the UK and funded by the Bill and Melinda Gates Foundation and the Open Philanthropy Project (a group of Silicon Valley donors).

Target Malaria has begun releasing GM “male-sterile” mosquitoes in Burkina Faso, West Africa, for training purposes and to test the infrastructure they would use to release gene-drive mosquitoes in the future. These “test” GM (not gene drive) mosquitoes will not offer any benefits for malaria control in Burkina Faso.

Gene drive mosquitoes are an unproven solution for malaria. Further, they have a high potential to become invasive, and their gene drive systems could spread to other species, with unintended consequences. The role of mosquitoes in the ecosystem is not well understood and the implications of removing them may lead to unpredictable ecological impacts (including the possibility that another disease-carrying species may take their place).

Projects such as Target Malaria’s gene drive mosquitoes ignore the root causes of malaria. Measures such as improving sanitation, eradicating mosquito breeding sites, and draining swamps are effective, affordable, and provide other social and public health benefits as well. In fact, the recent example of Sri Lanka, where malaria used to be rampant, presents a valuable model to replicate in other parts of the world. Government agencies and international and national organizations used a range of measures, such as filling pits and flushing water channels, rotating insecticide products, checking and treating all refugees and travellers, focusing on screening and treatment programs to reduce the parasite reservoir, and building public awareness, to control the malaria parasite (instead of the mosquito vector). Sri Lanka is now entirely malaria-free; the last case of malaria was recorded in 2012.

The June 2020 report from the African Centre for Biodiversity, Profiteering from health and ecological crises in Africa: The Target Malaria project and new risky GE technologies, lays out the three phase project: The project has been designed to conduct three phases of transgenic mosquito releases, with the first two phases involving transgenic mosquitoes and the final phase, the release of gene drive mosquitoes. The project aims to present responsible, phased releases where information from phases I and II can inform the final gene drive release in phase III. However, there appear to be limited relationships between the traits in the three phases.

“Western science has long been used to justify imperialist projects, as well as provide the tools for their application, while denigrating and simultaneously appropriating other scientific systems in the process…As with first-generation GMOs, second-generation GMOs will divert attention and investment away from sovereign systemic solutions to combat the ecological, economic and health crises on the continent. Such solutions can prosper from a clean break from the failed promises of first- and second- generation GMOs and their underlying, failed ideologies.”  –  Profiteering from health and ecological crises in Africa: The Target Malaria project and new risky GE technologies, African Centre for Biodiversity, June 2020

“This technology is in its infancy; the long term impacts on the mosquito populations (the disease vectors) and human health, as well as their potential ecological impacts are completely unknown. It is also clear that once released, the technology cannot be recalled due to its aggressive nature, which overrides natural inheritance patterns. Of course mosquitoes will also not respect borders.” – Mariam Mayet, Executive Director of the African Centre for Biodiversity

“In Africa we are all potentially affected, and we do not want to be lab rats for this exterminator technology. Farmers have already marched in the streets of Burkina Faso to protest genetically engineered mosquitoes and we will march again if they ignore this UN decision. We are giving notice now that potentially affected West African communities have not given their consent or approval to this risky technology.” – Mariann Bassey-Orovwuje, Friends of the Earth Africa, and chair of the Alliance for Food Sovereignty in Africa.

A Question of Consent research project: “We wanted to do an independent investigation and to gather different perspectives from villagers about what they understand of the project and what their concerns are. Our findings indicate that many people in Bobo-Dioulasso, Bana and the neighbouring village of Nasso, are concerned about the potential impacts of Target Malaria’s project and about the absence of risk assessment, and are unaware of many of the details of the project, including where the funding for the project comes from.”

Update – May 2019: Additionally, researchers have more recently experimented with fungi to kill mosquitoes and published results showing the effectiveness of a specific fungal pathogen genetically engineered to carry insect-selective toxins.