The early warnings of environmentalists about the negative impacts of genetically modified (GM) plants are being proven correct. We are now observing the following serious problems:

Herbicide-Tolerant Crops and Herbicide Use 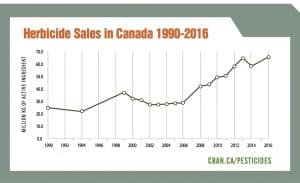 Almost 100% of the GM crops grown in Canada – corn, soy, canola and sugar beet – are engineered to be tolerant to a specific herbicide. Most are tolerant to multiple herbicides. Glyphosate is the top pesticide ingredient sold in Canada, and its use tripled between 2005 and 2011.

Between 1994 and 2020, herbicide sales in Canada have increased by 234%. See CBAN’s factsheet, November 2020: Genetically Modified Crops and Herbicides

Data from the US and Latin America also shows that GM herbicide tolerant crops have increased herbicide use. In the US, scientist Charles Benbrook found that total pesticide use was 24% higher for GM crops than it was for non-GM crops by 2011. The 2013 report “Soybean production in the Southern Come of the Americas: Update on Land and Pesticides Use” compiles and analyzes specific data on land and pesticide use in the main soybean producing countries of the Southern Cone of South America: Argentina, Bolivia, Brazil, Paraguay, and Uruguay.

Insect-Resistant Crops and Pesticide Use

GM insect-resistant (Bt) crops are engineered to produce a toxin that makes the entire plant toxic to some insects, such as butterflies and beetles. In the US, Bt crops decreased the use of insecticides by 124 million pounds between 1996 and 2011. However, the toxin produced by the plant may also have adverse environmental impacts. Bt crops simply change the way that pesticides are used, from sprayed on, to built in. Overall, GM crops in the US have increased pesticide use by 403 million pounds (183 million kgs).

One of the consequences of the increased use of specific herbicides with GM herbicide-tolerant crops has been the emergence and spread of herbicide-resistant (HR) weeds, or “superweeds”. These are weeds that develop resistance to certain herbicides when they are widely and frequently applied.

There are currently 37 species of weeds that are tolerant to glyphosate around the world. Five of these species are found in Canada. In the US, the USDA estimated that 28.3 million hectares of US farmland were infested with glyphosate- resistant weeds in 2013.

Herbicide resistant weeds also present economic costs for farmers. In the US, weed management costs in infested fields is 50-100% higher per hectare than in those without glyphosate-resistant weeds. Some weeds have developed resistance to multiple herbicides, making them even harder to control. The spread of HR weeds in turn drives up herbicide use, leading to a “pesticide treadmill” that has serious impacts on the environmental and human health.

The development of resistance in other insect pests targeted by Bt (Bacillus thuringiensis) traits in corn has been observed in the U.S., South Africa and Brazil.(2) Additionally, in the U.S. and other countries, some cotton pests have also developed resistance to Bt cotton traits.

Once released into our environment, genetically engineered (also called genetically modified or GM) organisms are difficult or impossible to control or recall. Each release of a GM organism is an experiment – some are more controlled and controllable than others.

GM contamination is the unwanted escape and spread of GMOs or genetic material from GMOs to non-GM plants, animals and foods. This dispersal can occur through a number of ways, including pollen spread and seed escape, and mixing of food and feed. GM contamination is living pollution that can self-replicate. Such contamination can have negative environmental, social and economic impacts. So far, the impacts have been economic and social – so far, farmers have been the first to pay the price of GM contamination.

There have been escape events in Canada with GM canola, flax, wheat and pigs.

For more information, see our report or our webpage on contamination.

Herbicide-tolerant crop systems have encouraged the use of herbicides that reduce overall plant diversity in agricultural systems and can limit habitat and food sources for other important organisms.

Monarch butterfly populations have declined by more than 90% in under 20 years. It is estimated that the butterflies may have lost more than 165 million acres of habitat in this time-frame largely due to the increase in the use of the herbicide glyphosate, which kills the common milkweed that the butterfly needs to breed. Click here for detailed information from the Centre for Food Safety US.

Pollen and other plant parts containing toxins from genetically engineered insect-resistant (Bt) corn are washing into streams near cornfields. Lab trials showed that consumption of Bt corn byproducts produces increased mortality and reduced growth in caddisflies, aquatic insects that are related to the pests targeted by the toxin in Bt corn.

The Nature Institute has established a project called “Nontarget Effects of Genetic Manipulation” to “make evidence about the wide-ranging and never wholly predictable effects of genetic engineering readily accessible to concerned citizens, policy makers, and scientists.” Click here to read their introductory paper “Understanding the Nontarget Effects of Genetic Manipulation.”

“When foreign genes are introduced into an organism, creating a transgenic organism (commonly called a genetically modified or genetically engineered organism), the results for the organism and its environment are almost always unpredictable. The intended result may or may not be achieved in any given case, but the one almost sure thing is that unintended results – nontarget effects – will also be achieved…Nontarget effects within the host organism are not necessarily due only to the gene directly related to the intended effect. There are numerous ways in which the genetic manipulation can affect changes in the host organism. Although the genetic intervention may seem simple, in reality one is dealing with a complex web of relations that can be altered in manifold ways.”