There is a range of new genetic engineering techniques emerging from the laboratory, these include techniques of genome editing and synthetic biology. There is a global debate raging over the regulation of these new techniques.

Genome editing, also called gene editing, is a term used to describe a collection of new techniques that alter the genetic material (usually DNA) of plants, animals and microbes. In general, these techniques consist of different types of DNA “editing” systems that aim to insert, delete or otherwise change a DNA sequence at specific, targeted sites in the genome. The organism’s genetic material is changed, not through the breeding process, but directly and artificially by humans, making these techniques a type of genetic engineering, resulting in the creation of genetically modified organisms (GMOs). 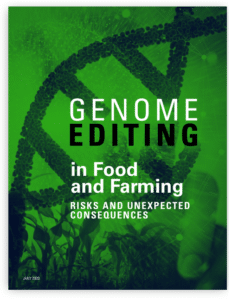 Genome editing systems are comprised of molecular components that are programmed to make changes (perform “edits”) at a target location in the genome. The most frequently used genome editing technique is CRISPR-Cas9 or CRISPR, but other techniques follow similar principles

Claims that these technologies are safer than other GM techniques are unproven. Each gene editing technique each bring their own set of risks and uncertainties. Whilst many of these are the same as with older genetic engineering techniques, there are also serious additional concerns. There is a strong scientific case for classifying all these techniques as genetic engineering (genetic modification or GM) and regulating their use with as much rigour as previous and current GM techniques.

The term “editing” implies a level of precision that is not currently, and may never be possible. It suggests the ability to rewrite the genetic code and to simply cut and paste DNA but, in reality, the results are still determined by processes in the organism that we neither fully understand nor control.

Gene editing can more efficiently target sites in the genome but the enzymes used in gene editing have been shown to cut DNA in the wrong spots and create off-target mutations. After a cut is made, the cell’s DNA repair mechanisms are in control of what happens next for the organism. The results can be alterations – such as deletions, insertions, and rearrangements – at the intended site, but also at unintended, off-target sites. Precise edits, even if possible, do not necessarily yield precise outcomes. Even a simple genetic “tweak” can have wide-ranging effects on an organism’s genome.

“Synthetic biology is a buzzword for the next stage of genetic engineering. What it involves really is synthesizing the parts of life, like it’s genes and RNA, in order to make quite novel new living organisms that are built from the bottom up. One of the ideas under synthetic biology is that ultimately, living organisms have a code, DNA, which you could reprogram in the same way you reprogram a computer.” – Jim Thomas, ETC Group

Synthetic biology is a form of extreme genetic engineering. It is an emerging technology that is developing quickly yet remains largely unregulated. With synthetic biology, instead of swapping existing genes from one species to another (as is done through rDNA technology/genetic engineering), scientists can write entirely new genetic codes on a computer, “print” them out and insert them into living organisms. Scientists are even trying to create life from scratch.

Artificial DNA is engineered into living things to fundamentally change their character. Nobody knows how to asses synthetic organisms for safety and, until now, governments and companies have refrained from releasing these organisms into the environment because they may threaten the natural world.

Gene drives are a technology through which a few genetically engineered individuals are designed to intentionally push new genes through an entire population of a species in the wild. The gene drive mechanism ensures that new genes will be inherited by all offspring (as opposed to an expected half of the offspring in normal inheritance) in subsequent generations. The release of gene drive organisms is designed to alter the genetic make-up of an entire wild population, or to eradicate a population or species.

Gene drives are being proposed for pest and disease control in agriculture. However, the most advanced research so far is in insects, specifically in gene drive systems that would alter genes to prevent mosquitoes from reproducing effectively, thus reducing the size of particular mosquito populations. The research group Target Malaria, funded by the Bill and Melinda Gates Foundation among others, aims to use gene drive mosquitoes to reduce the population of Anopheles gambiae mosquitoes, which transmit the parasite that causes malaria.

In agriculture, applications are being discussed to alter genes so that agricultural pests such as a type of fruit fly (spotted wing drosophila) and pigweed (Palmer amaranth) do not reproduce effectively, in order to make them ultimately go extinct. Researchers are also devising a type of gene-drive mechanism for mammals, and have outlined a hypothetical gene drive system intended to drive a desired trait though a herd or population of a farm animal. ETC Group analysis (2018) of two key patents on gene drives show that they each reference around 500-600 agricultural uses including brand names of 186 herbicides, 46 pesticides, 310 agricultural pest insects, nematodes, mites, moths and others.

Unlike GMOs that have thus far been engineered for confined use in agricultural production, gene drive organisms are expressly designed for intentional release into the wild. Releasing gene drive organisms can therefore be understood as a form of ecosystem engineering. Once released, gene drive organisms cannot be recalled, and the changes they create in the genetic make-up of the population are most likely irreversible. Acknowledgement of this challenge has led to theorizing various means to control or reverse gene drives, however these exist only as mathematical models and are accompanied by their own complex risks. The overarching concern is that genetic change to, or elimination of, an organism in the wild could disrupt ecosystems in unpredictable ways.

Call for a Global Moratorium on Gene Drives, December 5, 2016: 163 groups including CBAN called upon governments at the 13th Conference of the Parties to the Convention on Biological Diversity, in accordance with the precautionary principle, to put in place a moratorium on 1) any further technical development and experimental application of gene drives, and 2) environmental release of genetically-engineered gene drives. December 4, 2017: The Gates Foundation hired the public relations company “Emerging Ag” to co-ordinate a “fight back against gene drive moratorium proponents.”

The main distinction between gene driven organisms and most GM crops is that gene drive organisms are explicitly designed to live and reproduce in the wild.

Nanotechnology refers to the manipulation of matter on the scale of the nanometer (one billionth of a meter). Nanoscale science operates in the realm of single atoms and molecules. At present, commercial nanotechnology involves materials science (i.e. researchers have been able to make materials that are stronger and more durable by taking advantage of property changes that occur when substances are reduced to nanoscale dimensions). In the future, as nanoscale molecular self-assembly becomes a commercial reality, nanotech will move into conventional manufacturing. While nanotechnology offers opportunities for society, it also involves profound social and environmental risks, not only because it is an enabling technology to the biotech industry, but also because it involves atomic manipulation and will make possible the fusing of the biological world and the mechanical. There is a critical need to evaluate the social implications of all nanotechnologies; in the meantime, ETC group argues that a moratorium should be placed on research involving molecular self-assembly and self-replication.

Over Forty Groups Release Fundamental Principles for Nanotech Oversight,
Citing Risks to the Public, Workers, and the Environment:
The coalition’s declaration outlines eight fundamental principles necessary for adequate and effective oversight and assessment of the emerging field of nanotechnology.
I. A Precautionary Foundation: Product manufacturers and distributors must bear the burden of proof to demonstrate the safety of their products: if no independent health and safety data review, then no market approval.
II. Mandatory Nano-specific Regulations: Nanomaterials should be classified as new substances and subject to nano-specific oversight. Voluntary initiatives are not sufficient.
III. Health and Safety of the Public and Workers: The prevention of exposure to nanomaterials that have not been proven safe must be undertaken to protect the public and workers.
IV. Environmental Protection: A full lifecycle analysis of environmental impacts must be completed prior to commercialization.
V. Transparency: All nano-products must be labeled and safety data made publicly available.
VI. Public Participation: There must be open, meaningful, and full public participation at every level.
VII. Inclusion of Broader Impacts: Nanotechnology’s wide-ranging effects, including ethical and social impacts, must be considered.
VIII. Manufacturer Liability: Nano-industries must be accountable for liabilities incurred from their products.

May 2010: Nanotechnology prohibited in Canadian organic food production. An amendment was added to Canada’s national organic rules banning nanotechnology as a “Prohibited Substance or Method.” The section lists substances or techniques that are prohibited in organic food production, including genetic engineering, synthetic pesticides, irradiation, and cloned animals, among others.

For more information see ETC Group for reports and analysis.